Arlington VA resides in Arlington County of Northern Virginia. Sitting along the southwest bank of the Potomac River, Arlington overlooks Washington, D.C. With more than 236,000 residents, the area is the District metro area’s second largest principal city. With its close proximity to the nation’s capitol, Arlington is headquarters to the Pentagon, Arlington National Cemetery, and Reagan National Airport. Marymount University and George Mason University’s law school sit within the County.

A Brief History of Arlington VA

Arlington VA takes its name from Henry Bennet, Earl of Arlington. This plantation sat on the banks of the Potomac and was acquired by George Washington’s grandson in 1802. The plot of land later became Arlington National Cemetery during the Civil War.

Congress passed the Organic Act of 1801 which organized Washington D.C. into the County of Washington and the County of Alexandria, which included almost all of present-day Arlington County. This was later reversed in 1846, resulting in the return of all territory south of the Potomac River back to Virginia. 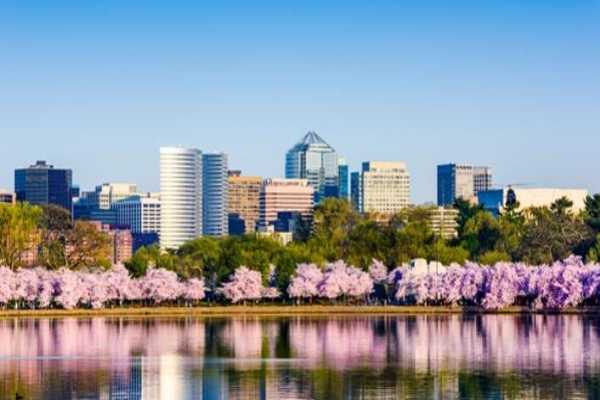 During the Civil War, Confederate and Union forces clashed at the border of modern-day Falls Church and Arlington, resulting in many deaths. However, Arlington was never captured by Confederate troops.

The 20th Century brought plentiful growth to Arlington VA. This period saw the establishment of Hoover Field where the Pentagon now stands, a satellite location for the University of Virginia that later became George Mason University, the Henry G. Shirley Highway (I-395 now), and several new neighborhood developments.

In more recent memory, Arlington VA saw tragedy on September 11, 2001 with the al-Qaeda terrorist attacks on the Pentagon. The area has recovered over the years, seeing several major corporations bring their headquarters to Arlington. As for the residents, Arlington VA has been ranked the “Fittest City in the U.S.”

Things to do in Arlington VA

Visit Arlington National Cemetery to pay your respects to veterans of every American war. You'll find headstones for those who served in every conflict from the American Revolution to the Vietnam War and the War on Terror. Officially designated as a military cemetery in 1864, Arlington National Cemetery is the final resting place of over 260,000 service members, including three unknown soldiers who are guarded 24/7.

The Pentagon Memorial is a beautiful tribute to those who lost their lives at the hands of the September 11, 2001 terrorist attack on the building. An outdoor fixture, the memorial pays homage to 184 people who died in the building and on American Airlines Flight 77. The site was the brainchild of Julie Beckman, Keith Kaseman, and Buro Happold, and opened seven years to the day after the attack in 2008.

The Drug Enforcement Administration Museum and Visitors Center chronicles illicit drugs in the U.S. and the efforts of the DEA to curtail their manufacture, sale, and usage. Opened in 1999, you'll find historical and informational exhibits about drugs that provide sobering insight into their consequences. Opinions on the museum range from hard-hitting to controversial and polarizing.

Water damage creates extensive blemishes in your Arlington VA home. From damaged building materials to warped flooring and compromised walls and floors, you need expert water damage repairs. RA Hyman Restoration has the experience and expertise to return your property to its pre-loss condition. Contact us today to schedule an inspection of your water damage repair needs.

With the beautiful architecture of Arlington VA, storm damage is a devastating blow to any property. Wind, rain, and large limbs wreak havoc on the structure of your home and business. RA Hyman offers storm damage board up, storm damage cleanup, and storm damage restoration to get you back in your property sooner. Schedule an inspection with a storm technician today to learn more.

The damage that results from a fire in your home or business is tragic and frustrating. After the flames are put out, where do you turn? Look no further than RA Hyman Restoration for professional fire board up, fire damage restoration, and fire damage repairs. We erase the unpleasant memories of the fire to make space for your new life. Call now to learn more about our fire damage services.

Arlington VA is an area that is full of rich history and architecture to match it. If you have a historic home or building that you'd like to restore, call RA Hyman Restoration, Inc. We perform historic restoration services to bring old properties up to speed while retaining the character that makes the space unique. We only use the highest-quality building materials and techniques.

Has your home suffered a restoration disaster? Or, do you simply need a change of scenery? If so, RA Hyman's home remodeling services are the perfect way to achieve the home you've always envisioned. We listen to your vision to bring each component to life. Trust our remodeling experts to stay under budget and on task at all times, keeping you fully aware during the remodeling process.